Looking to participate in a guided food tour when you next visit London? Stuart Forster reports on Eating Europe’s food tour of London’s East End.

“It used to be a dirty little secret,” says Emily, my guide, outside of Old Spitalfields Market at the start of our East End Food Tour of London. She’s talking about the district rather than the Eating Europe’s culinary walking tour, which has been operating since 2014.

Disclosure: I was invited to participate in a tour by Eating Europe, which did not review or approve this post. Some of the links below, marked with a (£), are affiliate links, meaning, at no additional cost to you, I will earn a commission if you click through and make a purchase.

The area that once lay outside of London’s city walls used to be shunned by tourists but times are changing. Hipsters have made Shoreditch theirs — renovating or gentrifying the district, depending on your point of view — and redevelopment of Liverpool Street Station has brought modernisation. This tour is a way of gaining an overview of the area while tasting food and drink enjoyed by Londoners.

Increasingly, people are seek experiences that provide insights into the destinations that they visit. Consequently food tourism is on the rise. Several companies now offer food tours in London.

The hipsters, says Emily, are the latest wave of people to make their mark on the East End. French Huguenots, Irish, Jewish and Bangladeshi settlers have all contributed to the evolution of the area and the food eaten in this part of London.

“The history reflects the food,” she says, adding that the tour we’re about to take is all about authentic dishes rather than gourmet cuisine.

Like one of the barbary lions that, long ago, were kept at the Tower of London, my stomach roars in anticipation of being fed. It’s 10.00am and I haven’t had breakfast. Talk about food is making me acutely aware that I’m hungry.

Rain begins to tumble from the heavy grey sky. Emily suggests we head to St John Bread and Wine (94-96 Commercial Street, E1 6LZ), a welcoming, unfussy restaurant with parquet flooring. It’s the first of eight places myself and the other two guests on the East End Food Tour will be tucking into edible produce (£): 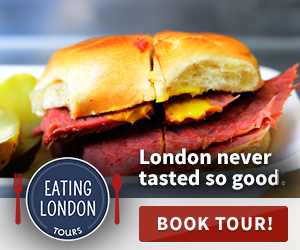 The menu is changes frequently and displayed on a chalkboard. The bacon sandwich that we’re about to taste is a staple and breakfast is served here from 9.00am to noon. Fergus Henderson’s ‘nose-to-tail’ ethos of cooking means dishes are served featuring flavourful cuts of meat such as tongue and cheek—ingredients that long fell out of fashion.

The bacon we’re eating comes from Gloucester old spot pigs reared at Butt’s Farm in Gloucestershire. The meat is soaked in brine for two weeks, then salt and sugar for a further fortnight, before being smoked. Chargrilled, the bacon is served with butter and a fruity home-style ketchup. It’s a proper bacon sarnie.

With the edge taken off my hunger I follow Emily past The Ten Bells pub, where, long ago, the prostitutes gruesomely murdered by Jack the Ripper used to socialise between clients.

We head into The English Restaurant (50-52 Brushfield Street, E1 6AG). Spitalfields’ oldest dwelling, dating from the 17th century, survived the Great Fire of London and has hosted a family-run restaurant for over two decades. Before eating we pop upstairs for a look in the wood-panelled function room.

A citrusy portion of bread and butter pudding is served with custard. I laugh when Emily mentions it was known in these parts as ‘dustman’s wedding cake’.

On our way to The House of Androuet (10a Lamb Street), a cheese shop within Old Spitalfields Market, Emily points out the hand-painted signage of the Donovan Bros. paper shop plus street art on walls and street signs.

In Brune Street we pause outside a former soup kitchen which operated until 1992. The ornate façade dates from 1902 and states it was established ‘for the Jewish poor’. Fleeing persecution in eastern Europe caused London’s Jewish population to swell from 46,000 in 1880 to more than 135,000 20 years later, Emily tells us as rain again begins to fall.

As I’m discovering, this tour is providing fascinating insights into the social history of East London. We wander through Artillery Passage to Gun Street, names who hint at the former military use of area. King Henry VIII used to shoot here. The German bombs, of World War Two, and subsequent slum clearances, brought major change during the last century (£): 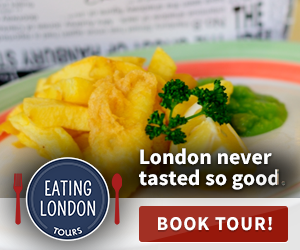 Fish and chips in London

In recent years, immigration to Britain and Europe has become a point of political discussion and proved a key issue in the Brexit referendum. On entering Poppies Fish and Chips (6-8 Hanbury Street, E1 6QR) Emily suggests that British people might not have had their national dish without immigration. In 1860 Joseph Malin, a Jewish immigrant, came up with the idea of serving battered fish with fried potato chips — a snack which had been popularised by Belgians.

Framed pictures adorn the walls of Poppie’s, which was founded in 1952. On the way down the ‘apple and pears’—stairs in anything other than Cockney rhyming slang—to the loos I spot a boxing poster advertising bouts featuring Ronnie and Reggie Kray.

Poppies’ chips, which are fried in peanut oil, prove knockout. I’m surprised by the light, crisp batter on the fish sourced from Peterhead. For the first time in my life I’m eating good fish and chips in London—as a northerner who appreciates the dish it’s something I’d long doubted could be found in the British capital.

A pint of London beer

Many Huguenots, protestants escaping persecution from 17th century France, were skilled silk weavers and worked in airy attic rooms in and around Wilkes Street. Emily explains how they introduced the idea of using hops in beer to south-east England. The Truman Brewery, whose bridge crosses Brick Lane, was once one of the East End’s biggest businesses. These days its premises host food stalls on Saturdays and a market on Sundays.

We taste a glass of beer brewed by the resurrected Truman brewery at the Pride of Spitalfields (3 Heneage Street). Lenny, the pub cat, sits and watches. It’s a proper London boozer serving inexpensive snacks and a good range of hand-pulled ales and ciders.

I could stay a while longer on the comfy red banquette but Emily has other ideas, leading us back to Brick Lane, the strip she describes as “the Las Vegas of curries” adding “there were 56 curry restaurants when I last counted.”

As we pass Brick Lane Mosque our guide mentions the premises were formerly used as a church and a synagogue.

While sampling vegetable bhuna, slow cooked lamb and chicken Madras, served with naan bread, at Aladin (132 Brick Lane, E1 6RU) I make a mental note to remind readers of Go Eat Do to turn up to this tour with a healthy appetite. Going home hungry isn’t on the cards.

The penultimate dining stop on the East  End Food Tour is Beigel Bake (159 Brick Lane, E1 6SB), whose sign states the unpretentious shop is open 24 hours 7 days a week. Emily informs us that around 3,000 bagels are served every day as we queue. She points out Sammy, the owner, as he oversees his employees.

The best bagel in London

I plump for a plain bagel layered with salt beef that’s been boiled for four hours and is served with a gherkin and mustard. Though I’m no longer hungry it’s testimony to the tastiness of this dish that I could easily go for another one if pressed.

Instead though we stroll past a smattering of street art and the Boxpark, pop-up shops and food stalls, on our way to Pizza East (56 Shoreditch High Street, E1 6JJ), a popular restaurant with a tiled bar area, for that hipster favourite, salted caramel tart, served with a cup of tea.

Leaving me suitably stuffed, and bursting with information about east London’s street art and social history, the food tour of London’s East End reaches its conclusion. I reckon a lengthy afternoon walk will help me digest both (£): 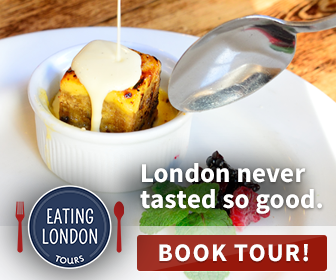 Take a look at the Eating Europe’s London Food Tours website or call +44 (0)20 32896327 for details of tour times, prices and how to book. In addition to their East End Food Tour the company runs a Twilight Soho Food Tour. Both of the guided walking tours are scheduled to last around three-and-a-half hours.

See the Visit London website for ideas about attractions to visit, city tours and places to stay. The Visit England site has information about London as well as destinations elsewhere in the country.

Enjoy this post about a Food Tour of London’s East End? If you’d like to see more of my work about food tourism, you may be interested in reading my post about a culinary rickshaw tour of Bari and aA food tour in western Newfoundland, Canada.